The game of Craps:

Craps is a dice game in which the players make wagers on the outcome of the roll, or a series of rolls, of a pair of dice.

Playing the game of craps:

Players use casino chips rather than cash to bet on the Craps “layout,” a fabric surface which displays the various bets. The bets vary somewhat among casinos in availability, locations, and payouts. The tables roughly resemble bathtubs and come in various sizes. In some locations, chips may be called checks, tokens, or plaques.

While shooting craps, players and dealers often use slang terminology to place bets and actions.

Against one long side is the casino’s table bank: as many as two thousand casino chips in stacks of 20. The opposite long side is usually a long mirror. The U-shaped ends of the table have duplicate layouts and standing room for approximately eight players. In the center of the layout is an additional group of bets which are used by players from both ends. The vertical walls at each end are usually covered with a rubberized target surface covered with small pyramid shapes to randomize the dice which strike them. The top edges of the table walls have one or two horizontal grooves in which players may store their reserve chips.

Craps can be quite intimidating to new players. Don’t worry, Casino Party Aces will take time to teach new players the rules.

The shooter is required to make either a pass line bet or a Don’t Pass bet if he wants to shoot. On the come out roll each player may only make one bet on the Pass or Don’t Pass, but may bet both if desired. The Pass Line and Don’t Pass bet is optional for any player not shooting. In rare cases, some casinos require all players to make a minimum Pass Line or Don’t Pass bet (if they want to make any other bet), whether they are currently shooting or not. 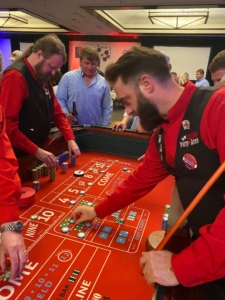